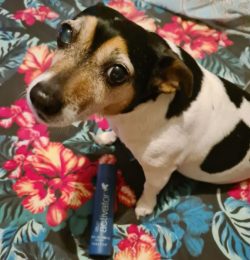 Jade recently turned 10 years old and since she was a pup, she has suffered from runny eyes.

Jack Russell Terriers can be prone to eye infections, especially as they get older and a common symptom of that is runny eyes.

Cataracts, Glaucoma, dislocated lens and other eye problems can also be linked to old age with this breed but, it can be very hard to determine because age is not just a factor due to runny eyes being the norm from such a young age. If this discharge is clear mucus, it is usually normal and the ‘weeping eye’ may not necessarily bother him/her.

It is important that the eyes are cleared from this discharge as when it drys, it may start irritating him/her and this is when the scratching starts, which could lead to damage being caused to the eye or dirt/debris getting in the eye from dirty paws. If this happens, the eye can become contaminated and progress to an infection… or worse.

If the discharge from the eye is a dirty yellow/brown colour, this is likely infected and will irritate even more. It is also likely to become very smelly and give off a stomach curdling aroma. It could potentially cause him/her pain and lead to blindness if not addressed early enough. At this stage veterinary guidance would be necessary. Cleaning the eye area at this stage, may spread any infected bacteria, and we definitely do not want that to happen!

I clear Jade’s eye regularly. As you can see from the photo (taken about an hour ago) her eyes are pretty clear with very little to no staining. I always avoid using my bare hands, because even when sanitized debris/bacteria could travel to the area and make things worse, and I would never touch her eye area with bare hands. I have seen it too many times, when people have scraped away at their pets eyes to remove the hardened mucus, usually digging their finger nails in to get rid of it…. WHY?

A cotton cleansing pad is the best way to wipe the face area down – it may take a little coaching for them to get used to this if they are an older dog, but this shouldn’t take too long?

I will only ever use ALOE ACTIVATOR on the cotton pad. A long time ago, I used warm water but all it did was wipe the mucus away and never clean the area without making it overly wet. The Aloe Activator is brilliant for wiping around the eye area and cleansing at the same time.

Occasionally, Jade suffers from scabby ears (inner) which are red and sore. I have never got down to the source of this but have a feeling it may be some kind of eczema, and the scabbing is on the inner ear lobe so cannot be seen without looking into her ears. I dont like her scratching, as this would only make it worse, so as soon as I see her attempt the first scratch, I am looking for the cause, and treating straight away to prevent her from hurting herself or causing further damage.

A little ALOE ACTIVATOR on a cotton pad, and gently wiping the infected area, has it clean and cleared in a couple of days. You can see by the expression on her face that although she may not appreciate having her ears turned whilst I treat the scabs, she gets cooling and soothing from the itch.

The Aloe Activator has many uses including:

💚 A unique moisturiser in liquid form featuring over 98% aloe vera gel.
💚 Use to Wash wounds
💚 Clean and Moisturize
💚 Soothes and refreshes
💚 Use on sore ears
💚 Dilute 50/50 when using to wash eyes

Get your Aloe Activator at my Shop